Camelids such as llamas and alpacas can be a good addition to a farm or ranch—alpacas as an alternative livestock enterprise and llamas as guard animals or recreational animals. They fit well into a diversified farming operation. Marginal pastureland is suitable for raising llamas and alpacas, with some supplemental feeding under certain conditions.

Both llamas and alpacas are members of the Camelidae family. Modified ruminants with a three-compartment stomach, they have cloven hooves and chew a cud like sheep and cattle. The young of both llamas and alpacas are called crias. Although they were previously classified under the same genus as llamas, the alpaca genus was changed from lama to vicugna in 2001 following genetic analysis showing that the alpaca descends from the vicuña, not the guanaco. Other members of the family, guanaco and vicuña, are wild animals classed as endangered species and protected from hunting in South America.

The llama and alpaca have been domesticated in South America for many centuries. There the llama is used as a beast of burden, as a fiber source, and as a meat source. The alpaca is used primarily for fiber production but is also a meat source in South America. Llamas and alpacas are quiet, intelligent, easily trained animals that can provide fleece and potentially a variety of services to the owner. They are adaptable to different climates and terrains. Alpacas and llamas offer a comparatively low-impact livestock alternative. Their padded feet do not have the same effect on the ground as hooves. In addition, they have efficient digestive systems and tend to consolidate feces, helping to control parasites and ease manure collection. 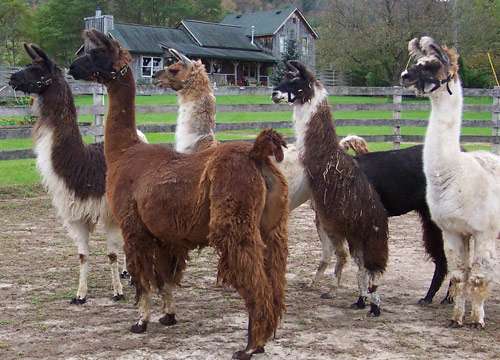 Llamas were first domesticated 4,000 to 5,000 years ago in the Andean Highlands. Typical weight of adult llamas can range from about 250 to 450 pounds. Their height at the shoulder is 42 to 45 inches, and at the head from 5 1/2 to over 6 feet tall. Llamas can live 20 to 25 years. They come in a wide array of colors from white to black, with shades of grey, brown, and red in between. They range from one solid color to various patterns and spots. There are different types of llamas: the wooly llama, the classic llama, the suri llama, and the silky llama. 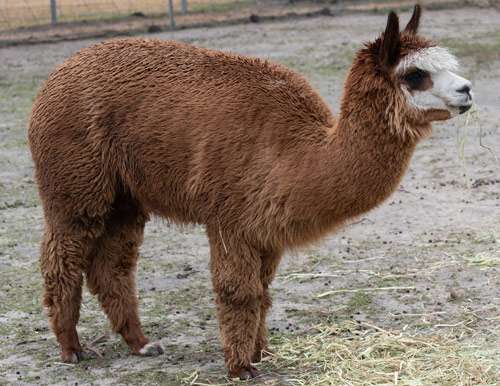 The alpaca was first imported to the United States in 1984. There are two types of alpacas, the huacaya and the suri. Huacaya is the most common variety of alpaca. The fiber of huacaya alpacas grows perpendicular to the body. It forms a lock structure that surrounds the body with fiber, giving the animal a fluffy, spongy appearance. Suri is a less-common variety of alpaca. The fiber of suri alpacas grows parallel to the body and hangs down the sides of the body in curly ringlets. Adult alpacas typically weigh between 130 and 200 pounds. Their height at the withers averages 36 inches. The alpaca’s lifespan is similar to a llama, averaging 15 to 25 years. There are 22 natural basic colors of alpacas ranging from black to white—including many different browns, grays, tans, and creams. Alpacas tend to be a single, uniform color, but occasionally will have white markings on the face, neck, or legs.

Llama and alpaca production practices are similar to those for sheep. Water needs to be accessible at all times. Llamas and alpacas are adaptive feeders, eating grasses, forbs, shrubs, and trees. They can be kept on a variety of pastures and hay. Approximately three to five llamas or five to 10 alpacas can be grazed per acre, depending on the quality of the pasture. A bale of hay will generally feed an adult llama for a week. Because of the animals’ high feed conversion, hays with high protein like alfalfa, are not recommended because the animals can easily become overweight.

During periods of stress, animals should receive supplemental feeds, such as small alfalfa pellets, oats, or blended feed pellets specially formulated for llamas and alpacas. Be careful if feeding straight pelleted feed because llamas frequently choke on the pellets. If pellets are fed, they should be mixed with a coarse feed or spread out in a large pan. The producer may also put smooth rocks in the pan to keep the llamas from gobbling the pellets too fast.

Free access to salt, minerals (with selenium in a selenium-deficient area), and clean water is essential.

Because llamas and alpacas are from the dry, thin air in the high plains and mountains of South America, they are not acclimated to the high heat and humidity in many parts of the United States, and are in danger of heat stress. Use of the heat index is a common tool for determining when animals are at risk. The key to combating heat stress is prevention; there are many practices to protect llamas and alpacas. Providing shade is an easy step. Shade can be provided by either trees or shelters, but good ventilation of shade structures is essential. Proper husbandry is another preventative measure and includes working or handling animals during the coolest part of the day, and planning for crias to be born in the spring. Shearing helps animals lose heat effectively and is one of the most important aspects of heat-stress prevention. In addition, proper nutrition can increase the animals’ resistance to environmental extremes.

Access to fresh water also helps prevent heat stress. Water should be kept in the shade, and electrolytes may be added if necessary. Another consideration is providing water for llamas to wade in, whether in the form of a pond, stream, or baby pool. Sandpits or concrete floors will also suffice as cooling areas. Finally, of utmost importance is monitoring for signs of heat stress, which include nasal flaring, open-mouthed breathing, increased breathing rate, drooling, depression, and loss of appetite. If these signs are observed, the first step is to cool the animal down by hosing, removal to a cool area, or placement in shade or water, and then call a veterinarian.

Llamas and alpacas are vulnerable to common internal and external parasites. One of the most deadly is the meningeal worm, or Parelaphostrongylus tenuis (P. tenuis), which causes neurological disease characterized by lameness, lack of coordination, inability to get up, paralysis, circling, and blindness, and can result in death. Death may occur in just a few days, or ataxia may last for months or years.

White-tailed deer are a natural host for the parasite, so areas with high concentrations of deer are at higher risk of meningeal worm. Preventative measures include:

Regular deworming with Ivermectin is often suggested, but this is controversial given the concern about the development of resistant gastrointestinal nematode populations. A definitive diagnosis of meningeal worm can only be made postmortem, as it requires demonstration of P. tenius in the brain or spinal cord. The Baerman technique, which relies on detection of larvae in the feces, is the only antemortem diagnostic tool. However, this test is unreliable as hosts rarely shed larvae in their feces. Treatment of the parasite is difficult given the severity of the neurological symptoms, but Ivermectin and anti-inflammatory drugs are recommended. See Managing Internal Parasites in Sheep and Goats for more about internal parasites. Llamas and alpacas are affected by the same parasites as sheep and goats, and the principles of management are the same.

A physical assessment of each animal should be done at least twice a year and should include weight or body score, mucous membrane color check, condition of incisors, and fiber coat evaluation. A detailed health assessment, such as fecal or blood analysis, or a veterinary exam, may be necessary if weight loss, pale color, or clumped stool is observed. Conversely, a review of diet and activity is necessary in the event of excessive weight gain

Gegner, Lance and Hannah Sharp. 2012. Llamas and Alpacas on the Farm. National Center for Appropriate Technology. Retrieved from https://attra.ncat.org/product/llamas-and-alpacas-on-the-farm/ 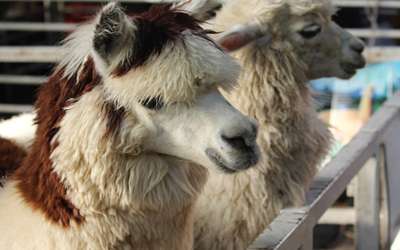 From the Pennsylvania State University Extension. A website with information about raising llamas and alpacas including production, health care, manure and nutrition management and more. 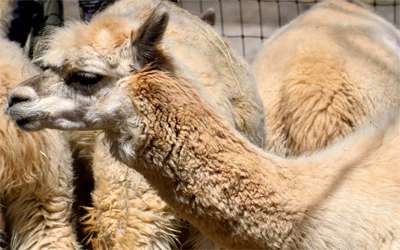 Internal Parasites of Sheep and Goats

This information applies to llamas and alpacas also. A publication that covers new techniques to manage parasites and to prolong the efficacy of dewormers. A list of resources follows the narrative. 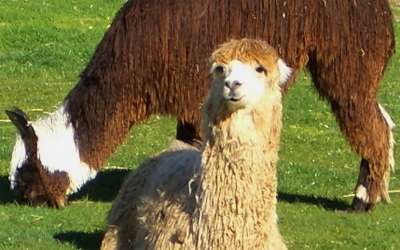 The Merck Manual may be more technical in descriptions of camelid diseases, but is comprehensive and useful for producers. Use as a first reference but consult a veterinarian for diagnosis and treatment.