What does "risk" mean? A simple definition is: Risk =  Hazard x Exposure x Probability.  It means that if a decision-maker is given the right information about a hazard, their level of exposure to the hazard, and an estimate of the how likely they will be affected by the hazard, a person should be able to make a reasonable estimation of their risk of experiencing that hazard.

There are many other factors involved when considering how risky something is, so the formula above may not reflect reality. Experience, economics, interactions with family, friends and co-workers, emotions, and values are important in how anyone makes decisions and takes risks.

Where are you on the risk taking scale?

Biosecurity practices have been proven to reduce the risks of livestock diseases. However, their effectiveness is based on a livestock producer's attitude toward the risk of getting a disease, and the choice of whether or not to use biosecurity for animal health protection.

Weighing the Probabilities of Livestock Diseases

A livestock producer may tolerate a certain level of disease when the response to it cannot pay for itself, or there may be a threshold after which disease control will be undertaken.

The benefits of disease prevention and timely control include higher production as animal illness is lowered, lower mortality or early culling, and avoided future control costs. Disease management costs can include testing and screening, veterinary services, vaccines when relevant, and perhaps changes to practices and facilities to reflect movement restrictions and quarantines when animals are added to the herd.

When producers reduce disease infection through prevention or control, they benefit not just themselves but any others at risk on, near or visiting that operation. The beneficiaries might also include at-risk wildlife surrounding the farm that may have direct or indirect contact with livestock or livestock-related material. Finally, livestock operations in the area of the infected farm benefit from disease management on their neighbors’ farms.

Other important benefits of disease prevention and control are "spillovers", or unexpected, positive consequences that deter other diseases. That is, the same management practices that prevent or eliminate one disease may also control other diseases.

Voluntary use of on-farm biosecurity practices is a hedge in preventing livestock diseases, and will help in avoiding higher costs associated with managing a disease.

In the case of porcine epidemic diarrhea virus (PEDv)—a severe and infectious disease that has been affecting U.S. hog producers for many years—biosecurity has been considered the most important prevention strategy for it. PEDv is highly contagious and lethal for piglets; it has resulted in substantial losses for the North American swine industry. Biosecurity practices such as disinfecting footwear, showering and wearing clean clothes before entering production premises, vehicle washing, and disinfecting can be used to reduce PEDv spread both within and between farms.

A research project studied the PEDv outbreak and producer compliance with biosecurity practices. The project collaborators built a model that included a simulated swine production system, to test and observe virtual farm workers' movements and decisions. A goal for the simulation was to see what would happen if they shifted small percentages of hog producers between "risk tolerant" (high tolerance for risk-taking behaviors), and "risk averse" (most cautious on a risk-taking spectrum). The results suggested that it is possible to create positive, lasting changes in animal health by "nudging" livestock producers toward more risk averse behaviors.

Although producers have access to biosecurity information and instructions, their attitude about risk, among other factors, can influence the willingness to comply with biosecurity protocols. Failure to comply can lead to herd infection, increased mortality of pigs of all ages, and economic losses for a farm. A second aspect to consider is the willingness by managers and owners to invest in biosecurity, for example purchasing truck-washing equipment or installing air-filtration systems.

The results of the compliance game research showed that an increase as small as 10 percent in risk aversion behaviors resulted in a 19 percent decrease in the median total of PEDv in pigs, which is equal to 36 fewer PEDv cases over the course of the study period.

Prevention of the virus does rely on good biosecurity practices, with active participation from pork producers, as well as the stakeholders in the pork production supply chain network. Crucial for biosecurity to work is the proper training of staff, and building a culture that consistently follows the protocols.

Experimental video games were developed to collect information about hog producer decision-making and risk taking during the PEDv research project.

How the game is played

A virtual farm worker was controlled by a game participant using the arrow keys on a computer keyboard. Each round began with the virtual worker inside the barn, with tasks inside the barn represented as spinning coins; when the worker was moved to a coin the participant earned one experimental dollar. Spinning coins appeared at a rate of one coin every two seconds. One time during each round a high-value outside task would appear: either a feed jam in the silo, a break in the water pipe, or the arrival of a delivery truck.

Attending to these outside tasks earned the participant experimental dollars, depending on how quickly they accomplished them. Each of these external tasks started out with a $30 value that decayed by $1 each second. To earn experimental dollars from these high-value tasks, the player needed to leave the barn, and this involved the primary decision in the game: whether or not to use the “shower in—shower out” biosecurity practice. The shower in and out exit is on the left, the emergency exit is on the right.

Click on the compliance game screen below to view a demonstration of the game (this is not the full game). 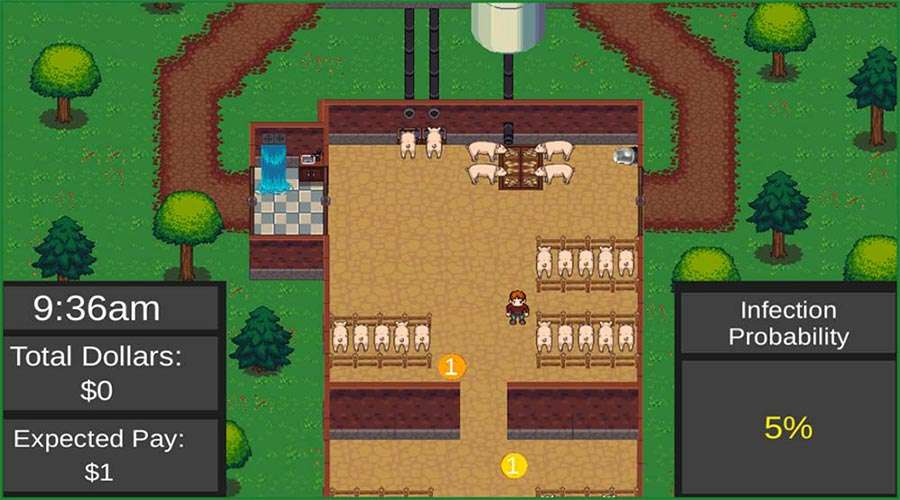 Take the next step in managing animal health by assessing where biosecurity gaps are on the farm.