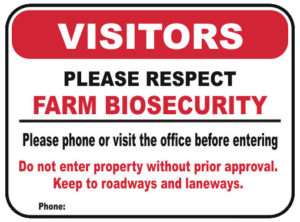 Biosecurity plans and procedures are important for minimizing the risks of introducing infectious agents/disease pathogens to a farm. Biosecurity can also be considered biological risk management.

On-farm security (also known as agrosecurity) addresses the intended as well as unintended introductions of disease pathogens to a farm, along with other security threats:

It is just smart practice to pre-screen new employees. Ask employees to report unusual behavior, such as another employee lurking around areas where feed or agricultural chemicals are stored. New employees should not be allowed to operate alone in sensitive areas.

Deterring access to your facility is the first step in making sure unwanted guests don't visit. Keeping gates and buildings locked will also deter unwanted access. Measures to prevent incursions should include posting biosecurity rules and enforcing them, monitoring and documenting all visits and visitors, and limiting access to livestock and crops. It's a good idea to not allow anyone who has been on a farm in a foreign country to enter livestock units for the first seven days after return to the United States. The foot-and-mouth disease (FMD) virus can be harbored in the nose and throat of humans for three or four days after being around heavily infected animals. People don't get sick from FMD, so the virus will be carried passively within the human, even though it isn't replicating. But just one big sneeze in the vicinity of livestock could dislodge some of those viral particles and start an outbreak.

It is obvious that vehicles can transport disease agents across hundreds or even thousands of miles.

A good example of how a vehicle disseminated disease in an outbreak happened during the foot-and-mouth disease crisis in the U.K. in 1967. As milk tanker trucks were driving along the road between ranches and down highways, drops of milk leaked out. The virus in the drops of milk aerosolized and infected cattle all along the way.

Feed and equipment deliveries, and animal delivery and collection ports are important potential sites where diseases can be introduced or spread. These delivery and dispatch sites are called contact points. Contact points should be located in an area that is separated from animals on the farm, preferably outside the farm's restricted access area.

For instance, trucks can unload their deliveries outside a perimeter, and the facility's own personnel and equipment can bring the items in. This can be considered almost like having a mini-version of a border-crossing station.

Vehicles should be parked on a concrete section of road rather than on a field or on soil. Many pathogens survive very well in soil, and this soil could then be transported to another facility on the tires.

It is advisable to purchase feed and supplies from known, reputable firms and individuals, and to keep a detailed record of all purchases. On the farm, feed and other supplies for livestock and poultry should be kept secure to avoid any tampering.

Allowing any human food products to be brought onto production premises for livestock, dairy, or poultry is always a risk. The last outbreak of foot-and-mouth disease (FMD) in North America occurred in 1952 in Saskatchewan, Canada, because of a German sausage brought onto a hog farm. And, some say that a classical swine fever outbreak in the United Kingdom in 2000 began when a hiker discarded a ham sandwich on a footpath.

Livestock Shows, Auctions and Other Events

People who organize events involving animals need to take steps to guard their premises from deliberate or accidental disease transmission. At livestock shows and auctions, there should be surveillance of suspicious visitors or activities.

It is important to take steps to prevent unauthorized people from tampering with air transfer equipment such as air conditioners, heat exchangers and forced air heaters.

Pesticides and fertilizer are just two types of compounds that might be stored in bulk and applied to animals or plants, in routine agricultural practices. Unfortunately, there are some serious risks associated with purchasing and using these materials.

Accidental or intentional application of a toxic chemical in certain situations could result in poisoning of feed and crops, or contamination of meat from animals consuming the tainted feed. Some common fertilizers can be used to make rudimentary explosive devices.

Safety and security surrounding the storage, maintenance and application of agricultural chemicals is very important. The following is a list of fundamental security control measures to protect chemicals, fertilizers and other biohazards from tampering or theft.

You are on the way to creating a livestock biosecurity plan. Get started here and then continue on to the Detect and Respond sections of this website for more information to add to the plan.